Welcome to the BCGEU Environment Committee newsletter! Twice a year we will update you on the activities of the committee, as well as opportunities to get involved in actions to protect our environment and secure our collective future as we face the climate crisis.

In this first issue:

I hope you enjoy this issue and if you have any feedback, we'd love to hear from you. Please email [email protected] and we will respond shortly.

In solidarity,
James Coccola, BCGEU Vice President and Chair of the BCGEU Environment Committee
Check out our Twitter feed to see the news we follow

Representing the voice of labour at COP24 in Poland

In December I was honoured to have the opportunity to help represent the voice of the labour movement at the 24th session of the Conference of the Parties (COP24) annual UN conference on climate change. As part of Canada’s delegation, I joined over 30,000 other participants in the town of Katowice, Poland for 14 days of talks.

The objective of the conference was to finalize the rules for the implementation of the Paris Agreement for reducing emissions and for reporting fairly on the progress on climate action. While agreement on the rulebook was achieved, COP24 ended with no clear promise of enhanced climate action or government commitment to cut emissions.

As a member of the labour delegation, we fought for and won the inclusion of language in the negotiation text about a “just transition” for workers. This is a big win for workers on the international stage and it will ensure that as our economies change to address the climate crisis, we will be included in the conversation.

This experience has made clear to me what many of us already know. National governments themselves will not lead meaningful action on climate change – real change will only come from the leadership of the people on the ground. The youth voice in particular is getting louder by the day and I was inspired by their courage and commitment to demanding solutions at COP24.

Back in B.C., let’s do all we can to encourage youth to speak up about safeguarding their futures as they continue to join the people-powered movement to address the climate crisis.

An update on our work to protect wild salmon

Last June our union signed the “Declaration in Defence of Wild Salmon,” to ask the provincial government not to renew 20 expiring fish farm licences in the Broughton Archipelago. This area is a major migration route for wild salmon, and fish farms have no business being there, especially without the consent of Indigenous groups in whose territory the operate.

In response, government introduced new rules for fish farm licences beginning in 2022. The rules represent a significant step towards both defending wild salmon and reconciliation with First Nations. (For more on the policy click here.)

It’s good news, but action in the short-term is still needed. The groups behind the declaration have turned their attention back to pressuring the federal government to protect wild salmon, as they are ultimately responsible for regulating the industry. To stay up to date on the latest developments regarding wild salmon visit: Watershed Watch Salmon Society, Living Oceans and the Georgia Strait Alliance. 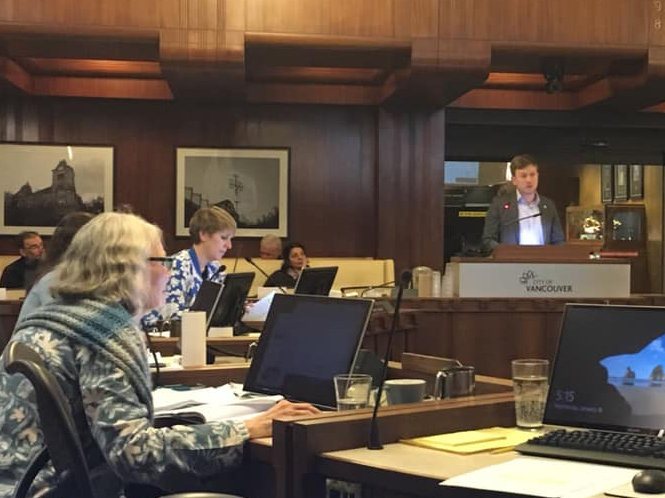 This January in Vancouver, OneCity councillor Christine Boyle proposed that the city declare a climate emergency to speed up its greenhouse gas reduction plans and increase its climate action.

I spoke in support of this motion to council (pictured right), emphasizing that climate change disproportionately impacts working and marginalized people, and all levels of government have an obligation to do more.

Vancouver city council voted unanimously to approve the motion and a report on actions to be taken is due back to council by mid-April. Vancouver has now joined cities such as Los Angeles and London England in declaring a climate emergency and we hope to see more local governments across B.C. ramp up their efforts as well.

Image: James Coccola speaking to Vancouver City Council about the need for the city to increase its climate action, January 2019.

Our work to improve resource management in the province

Our province is massive, about the size of Britain, France and Spain combined,[1] yet 85% of the province’s area has less than 1 person per square kilometre! [2] So, when industry is clearing development sites, extracting resources, or building infrastructure, who is out there making sure this is being done in a way that is environmentally responsible?

Well for the past 15 years, we have heard from fellow members that industry-paid professionals have been increasingly used in monitoring, oversight and decision-making about major projects that impact our environment through a regulatory approach called “professional reliance.” In other words, industry has been allowed to hire “experts” of their choosing to assess and approve their plans rather than having them reviewed by impartial government scientists and engineers.

From mining to forestry, professional reliance hasn’t worked for B.C. In 2014, the tailings dam at the Mount Polley mine collapsed, dumping 25 billion litres of waste into Quesnel Lake, Polley Lake and Hazeltine Creek after government reorganization led to a drop in engineering inspections. The number of forest-industry inspections are now less than one-third of the number conducted before professional reliance.

Last year the provincial government initiated a review of the professional reliance approach and the BCGEU responded with a lengthy submission calling for the environment and the public interest to be better protected.

Thousands of BCGEU members’ day-to-day work has been negatively impacted by this regulatory model and after 15 years of sounding the alarm, the provincial government introduced the Professional Governance Act in October. The new legislation will lay the foundation for a series of much-needed changes to better protect and manage the province's natural resources for generations to come and the BCGEU will watch for continued progress.

In 2017 we saw the creation of the Climate Solutions Clean Growth Advisory Council to the Premier as appointed by Environment Minister George Heyman. The council provides advice to government on actions and policies that can contribute to carbon pollution reductions and sustainable economic development.

BCGEU environment committee member DJ Pohl sits on this advisory council and through her participation, she ensures workers have a voice in the development of strategies to tackle the climate crisis we are facing.

This council contributed to the development of the CleanBC plan, launched in December 2018. The plan is a pathway to achieve the province’s legislated climate targets of reducing greenhouse gas (GHG) emissions by 40 per cent by the year 2030, based on 2007 levels. As outlined in the 2019 provincial budget, this plan is now fully funded with a $902 million investment over three years for CleanBC programming.

BCGEU members have shown a desire to do more as individuals, as well as in calling on the provincial and federal governments to protect our land, air and water. Through DJ’s work on the advisory council, the interests of BCGEU members and workers in the labour movement are represented as she continues to advocate for positive policy that protects British Columbians and our environment.

[1] Canadians: a narration of events by William Irish
[2] Statistics Canada